In 1975, Zapata taco shells, etc. that were sold in grocery stores were rebranded Ortega. In 1976, Zapata restaurants expanded nationally with a new name, Zantigo.

With the Heublein acquisition, the Zapata brand and image of the Mexican revolutionary began to fade. Heublein already had its own (smaller) line of Mexican-style packaged foods under the Ortega brand, and in 1975, the Zapata taco kits, shells, sauces, etc. were rebranded Ortega. And in 1976, as Heublein expanded the restaurant chain beyond Minnesota into other states through franchise offerings, the Zapata brand disappeared altogether with a name change to Zantigo. (The Fridley, Minnesota Zapata restaurant was briefly rebranded Ortega, apparently as a test, before Zantigo was selected as the new name.)

There was a lot of speculation of why the name was changed, such as the fact that the namesake, Emiliano Zapata, was a controversial figure, or that his heirs did not want his image used in a commercial enterprise, but the company's official position was that the name didn't fit their national marketing plans. There were other similarly-named restaurants in different parts of the country so they couldn't register it as a trademark nationally. Zantigo, while exotic-sounding, was a unique name that would be easy to trademark. The Zantigo logo replaced the revolutionary figure with a blazing sun on colorful signs, cups and packaging.

Meanwhile, Zapata founding partner Marno McDermott started a new Minneapolis-based chain of Mexican-style restaurants in 1975 called Chi-Chi’s, with sit-down service and a liquor license. Eventually there were also Chi-Chi’s branded packaged Mexican foods just as Zapata had. Chi-Chi, according to the company, was McDermott’s wife’s nickname. The Chi-Chi’s restaurant chain folded in the U.S. and Canada in 2004, but Chi-Chi’s grocery products continue to be sold, and Chi-Chi’s restaurants are still in other countries.

Over the next decade, Zantigo expanded into a chain of 82 locations in several states, and the outlets tended to be more profitable than the better-established rival Taco Bell. The company changed hands several times in the first half of the 1980s, until 1986 when soft drink maker PepsiCo Inc., which owned Taco Bell, would purchase Zantigo for $850 million.

The first big change at Zantigo was when they switched from serving Coca-Cola products to Pepsi products in the fall of 1986. In 1987, Zantigo outlets were converted to Taco Bell, with a few of the more popular Zantigo menu items carried over. Zantigo buildings, it was discovered, tended to be in better shape than Taco Bell buildings, so in instances where there was already a nearby Taco Bell, it was the old Taco Bell that was shut down.

​​In 1999, a new Zantigo chain was started by a former Zantigo manager and his brother, opening three restaurants in Minnesota, with a fourth added later, some in former Zantigo locations, with a menu that includes many of the classic Zantigo items, and new ones as well. The signage, featuring a mustached man in a Sombrero, seems to pay homage to the Zapata roots, although the official website has a whimsical story about this man named Zantigo. The cheese chilito remains an all-time favorite. 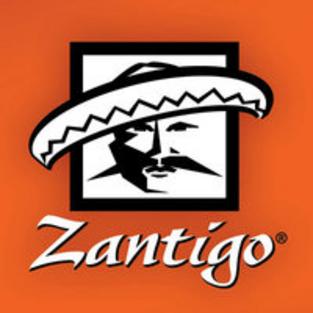 Zapata Mexican-American food became especially popular with teenagers and young adults, and in Minnesota, a region far from the southern border of the United States, and a place where a plurality of residents are of Scandinavian or European heritage and are known for a fondness for the bland and ordinary, the success was indeed somewhat revolutionary. But, it's the younger people who usually are more open to trying something new and different. Plus, Zapata provided quite satisfying “munchies” when one consumed large quantities of alcohol or weed in those freewheeling, partying days. And if you were one of the cool kids in the neighborhood, you had a 21"x 58" Zapata poster depicting the revolutionary, armed to the teeth, offered by the restaurants for $1.00, or just 50 cents in a special promotion in the spring of 1973.

In 1969 and into the early 1970s, there was a Mexican Revolution of sorts in Minnesota of all places. Zapata Mexican-American fast food restaurants opened its first outlet in Minneapolis in April 1969. By the time the chain was sold in 1974 there were eleven Zapata restaurants, nine in the Twin Cities and two in southern Minnesota. In addition, the Minneapolis-based company produced and distributed a line of taco kits, sauces, shells and spices sold at supermarkets under the Zapata brand for at-home tacos, with distribution eventually reaching 31 states.

Zapata restaurant buildings were made of brick and glass, with south-of-the-border style architecture. The signage had the word ZAPATA in bright red letters, standing out from a black and white depiction of Mexican revolutionary legend Emiliano Zapata. Inside you could get popular Mexican-style favorites such as tacos, enchiladas, burritos, tostadas and quesadillas that you ordered from the front counter and either ate in the restaurant or took home in a paper sack, like any other fast food fare. For those who found the food too exotic, burgers and hot dogs were also on the menu.​​ 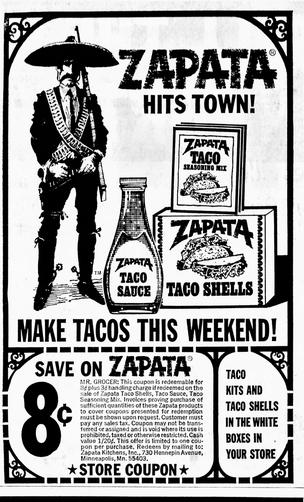 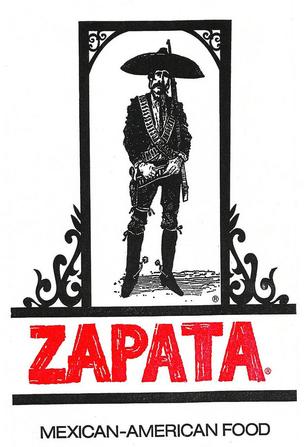 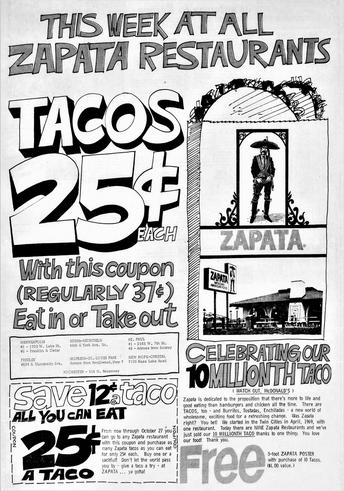 ​With headquarters at 730 Hennepin Avenue in downtown Minneapolis, Zapata was founded in 1969 by a young businessman named Marno McDermott along with partners John Albers and Jerry Gale. They pooled their funds to buy a California-based franchise called El Taco for $33,000. But instead of opening an El Taco franchise, they opened their first Zapata Mexican-style restaurant on 1323 West Lake Street in Minneapolis in April 1969, and soon the parent company, originally called El Taco of Minnesota, Inc. became Zapata International. As Zapata expanded into a line of Mexican-style pre-packaged foods in 1970, extending the Zapata brand beyond the limited reach of the restaurants, the company became Zapata Foods, Inc.

An advertisement that Zapata Foods ran in the business section of the Minneapolis Tribune on January 16, 1972 mentioned that "In 1968 the Gallup Poll named Mexican-American foods the number one foreign food choice in the U.S.A. And they're even more popular today, with principal buyers teen-agers and young adults. Volume grew from practically nothing in 1960 to over $160,000,000 in 1970."

The regional success Zapata was having in the restaurant and packaged foods businesses attracted the attention of Heublein, Inc., a food and liquor conglomerate based in Farmington, Connecticut. Heublein owned the Kentucky Fried Chicken and H. Salt Fish & Chips chains, and until recently owned another Minnesota business, the Theodore Hamm Brewing Company of St. Paul. They also marketed a wide array of grocery products, ranging from A1 steak sauce to Snap-E-Tom tomato cocktail. Zapata's restaurant and packaged food businesses were deemed to be a good fit for the Heublein portfolio.

In 1974, Heublein made an offer and Zapata shareholders approved in June of that year, selling the company for $3.7 million of Heublein stock, valued at $7 a share. Former Zapata executive John Albers told the Minneapolis Star and Tribune in 1986 that they sold when “it became apparent we needed more capitalization to go further.” 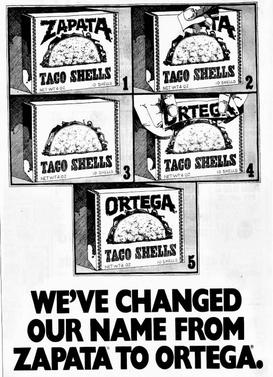 Newspaper ads for Zapata Mexican-American restaurants and grocery products, from 1973.

A new regional chain of Zantigo restaurants (with a nod to the Zapata heritage) was established in the Twin Cities in 1999.