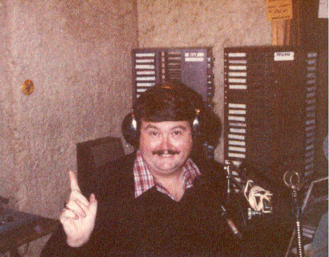 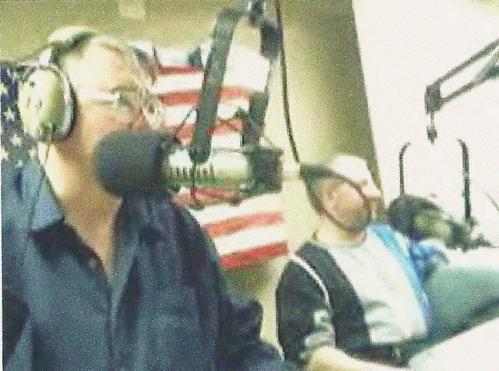 After graduating from South High in Minneapolis, he enrolled in Brown Institute to learn broadcasting, with a class that included Gary Gears, who went on to national fame as a voice talent and who also eventually died at a relatively young age.

Mulroy supplemented his education by hanging out at radio station KDWB, one of the popular AM top-40 stations in town. He got to know the staff, who tolerated the large, ever-curious young man's presence. But he was realistic enough to know that a big-time station like that wouldn't hire him as a fresh Brown grad. When he graduated from Brown on August 21, 1965, he came by the station to show off his diploma and get some words of encouragement from the “big boys.”

As Mulroy told the story on his on-line autobiography, “While in the reception area to see Dick Harris (news guy) I heard someone say there was a need for someone in the newsroom. Jack Douglas was the news director and saw me standing there and recognized me from hanging around the station. ‘When do you finish up at Brown?' he asked. I gulped and said, ‘I finished today.' He waved me back to his office and asked me a few questions. I was hired.”

It was decided, however, that Darrell Mulroy wasn't a hip-sounding radio name. In a meeting with Douglas and general manager Sam Sherwood, the first name was shortened to Del. The name Roberts was on a tape recorder in the office. Later, when somebody called the station and said “I wanna speak to that ugly Del,” the rest, as they say, is history. He wasn't on-air often at KDWB but he got to drive the news cruiser around town, do traffic reports and was part of the crew representing the station at the Beatles press conference.

From there he went on to various small-market radio stations such as WCMP in Pine City, KBMW in Breckenridge and KCCR in Pierre, SD. In 1969 he landed a job as the early evening “teen shift” DJ at WEBC “The Big 56” in Duluth, where he developed the quirky style he was known for in his later years. He'd begin his show with the old 1940s Tom Mix intro (“Straight shooters always win! Law breakers always lose!”).

He left WEBC and radio altogether in 1970, disillusioned by the micromanagment and the drug culture that was seeping into the business. He had a stint working behind the scenes in the newsroom at KSTP-TV Channel 5 and went on to pursue careers in law enforcement, private investigations and news photography, which he had studied for while working in radio. He got married and eventually had three children (“One of each sex,” he liked to say). His firstborn, a son, was named Del Robert Mulroy.

He had no plans of returning to radio but in 1979 he got a call from his former WEBC colleague Scott Carpenter, who had been hired as program director at WWTC-AM 1280 in the Twin Cities. WWTC had been in the ratings hole for some time and was phasing out an all-news format for music. At first it was adult contemporary music but Carpenter decided the station ought to do something nobody else was doing -- rock ‘n' roll oldies played by high-energy disc jockeys. The 34-year-old Darrell Mulroy took the bait and Ugly Del Roberts was back on the air. 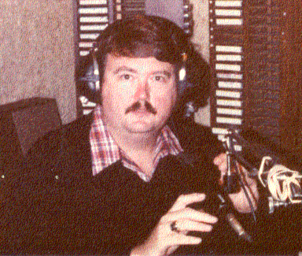 Webcam pic of Ugly Del Roberts (with guest) doing his last show in the WWTC-Salem Broadcasting studios on March 15, 2003.

“For the Class of 1962, Tommy Roe and ‘Sheila.' Good evening to everybody in Crystal, Brooklyn Park and Clumsy Heights…How ya doin' Twin Cities! You got the Incredibly Ugly Del Roberts with you on the Golden Rock, WWTC. Seventy-five degrees on the outside, uh-huh! I can dig that. Good night to head out to the River Road. Give your honey monkey bumps. Dedication lines are open. Wanna dedicate a song, give me a call.”

Ugly Del was officially a part-timer, doing weekends and fill-ins during the week but as a result he was often the most heard personality on the station. Audience participation was a big part of the show as he invited listeners to call in and dedicate the next song he was going to play or he'd just put a caller on the air to tell a joke or do something silly. When he made an on-air plea for cookies, listeners in droves brought sacks of cookies to the station. When he played a romantic song, he said it was “your opportunity to give your honey monkey bumps.” He was a master of the one-line zinger and quick wit in any situation.

He left WWTC in the Spring of 1981 but returned in the Fall of 1984, coinciding with a gig as a live DJ at the Jukebox Saturday Night nightclub in downtown Minneapolis. Shortly after his return, however, WWTC decided to drop oldies in favor of techno dance music. Ugly Del agreed to stay with the new format but he refused to use his name on the air and was quite vocal in his criticism of the format while away from the microphone. Meanwhile, he continued to work at Jukebox and later brought an oldies theme to the nightclub George's in Fridley. Eventually he was hosting a live show at the Frogtown Diner in St. Paul on Saturday nights, which was simulcast on KLBB-AM 1400, and later KDWB-AM.

In 1988, he returned to WWTC, which decided to try oldies again after several failed formats. He did his old show once again but left a few months later, annoyed by the micromanagment he had to deal with from the people currently running the station. He programmed an oldies station in South Dakota for a while and had a short stint spinning contemporary country music on KJJO-FM (104.1) as “Hopalong Del” before finally getting out of radio for good. Or so he thought.

In 2001 he got a call from John Hunt, general manager of (where else) WWTC. After several more format and ownership changes the station was now “AM 1280 The Patriot,” doing a conservative talk format. Hunt didn't want Del as a talk host (although his politics were on par with those of The Patriot) but thought it would be fun to have him host a Saturday night oldies show on the station to counter-balance all the news about terrorism, war and battles between Republicans and Democrats, especially post-9/11. Del said he'd do the show only if he got no interference whatsoever from management or consultants. Hunt agreed to the terms and Ugly Del was back on the air at WWTC.

“My name is Darrell Mulroy. Ugly Del is a character I portray on the radio,” he'd tell people who got to know him beyond his radio persona.

Physically, Darrell Mulroy was a large, rather intimidating figure. Yet he was one of the kindest, most generous people you'd ever meet. He was a self-proclaimed “staunch right-winger” yet he was anti-establishment at the same time. He was Darrell to his friends and family and in the many diverse professions he was involved in. But on the radio, he was the Incredibly Ugly Del Roberts.

Darrell Mulroy was born in the town of Wheaton, Minnesota in 1945. He later moved to Minneapolis and became infatuated with the phenomenon of rock ‘n' roll upon seeing the movie “Blackboard Jungle” as a youngster. From there he obsessively sought out that new kind of music on the radio.

Tuning in stations such as WDGY and the old WLOL-AM, he heard that music played by disc jockeys such as Herb Oscar Anderson, Hal Raymond, Steve Cannon, Dick Driscoll, Lou Riegert, Sam Sherwood and many others. He later said that once he had an interest in the music, his interest in radio was a natural.​ 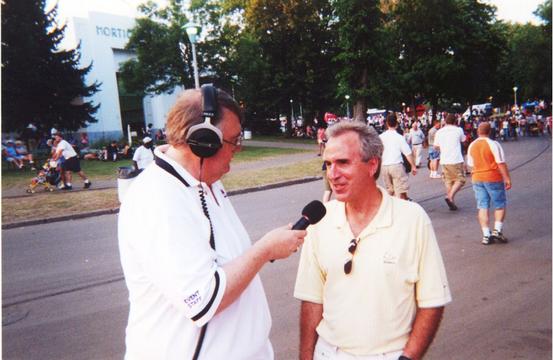 Now in his fifties, Del played a mix of familiar and not-so-familiar oldies and lots of local oldies, as he did in the old days. He alternated the station's current and former liners by identifying it as both “The Patriot” and “The Golden Rock.” He occasionally had guests, including ex-WWTC disc jockeys, lobbyists for causes he supported and just regular friends. Some of the best moments were when he'd have his much younger but equally-intelligent wife Tiffany on, serving as his foil. He involved the audience by inviting them to participate in an on-line chat room and he had a webcam set up in the studio so you could see him. He still talked about “monkey bumps,” told slightly off-color jokes and did one show of “banned and politically incorrect” music. All without any interference whatsoever from management.

Over 200 people showed up at a casual (he wouldn't have it any other way) memorial at Broadway Pizza in Minneapolis, family and friends who knew him from his many lines of work. On on-air tribute aired on WWTC in his old time slot the following Saturday, hosted by WWTC alumni Dick Driscoll and Nancy Rosen, along Tiffany, the young woman who loved and admired him more than anybody. The last vestige of fun radio is gone for good.

Hear original airchecks of Del Roberts on WWTC and other stations at
RadioTapes.com.

Big Reunion: Del Roberts interviews former Golden Rock colleague Brad Piras on WWTC at the Minnesota State Fair in 2002, the station at this point known as 1280 The Patriot.

His last show was on March 15, 2003. He had many health problems over the years and especially within the past year, but it never showed on the air. He mentioned on the air that he had had “cardiac issues” after doing his show the previous week and thanked the paramedics and hospital staff for saving his life.

Don't die on us,” an in-studio guest told him.

“I'll try not to. I try to stay above room temperature,” he quipped.

After a late dinner with his wife, granddaughter and some friends, he went home, went to bed and died in his sleep. He was 58. 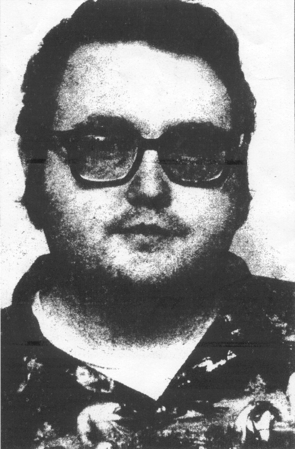