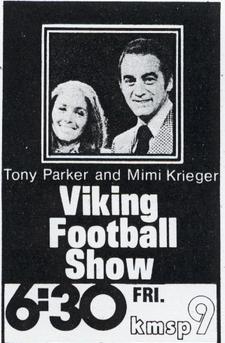 From 1955-56 Tony Parker hosted Theater of Stars live from the Foshay Tower on KEYD-TV Channel 9, later to become KMSP-TV.

On her online blog, daughter Tracey recalled her father this way: "A full-blooded Italian, Dad was the epitome of tall, dark and handsome. He had a beautifully articulate and deep speaking voice, and could sing like Bing Crosby, though I only heard it when the kids begged him to join the neighborhood Christmas caroling. As a young and upcoming television anchor he was encouraged to leave behind his Italian surname for a more fitting sportscaster name—Tony Parker. Though the family continued to go by Oliveto, his new name did fit him and that's how he's known to this day."

He came to Minnesota in the mid 1950s and began his career in the new medium of television. Channel 9 was known as KEYD-TV at the time and in the early days, although he came to be best known as a sports reporter, he had a variety of on-air duties on the new station, which included announcing, hosting the Theater Of The Stars movie and sportscasting on weekends. A 1956 TV Guide local edition profile also described him as "a veteran of dramatic acting, music and comedy." Jack Horner was the main nightly sportscaster then, with newscaster Harry Reasoner, who would later go on to network fame, and weatherman Bob Fransen, who soon went to WTCN-TV Channel 11 and would eventually serve as the station's long time general manager.

The 1956 TV Guide profile went on to say, "Tony's favorite reading material is the contexts of supermarket ads. You see, his only hobby is scientific shopping. Neither Tony's wife or two daughters are allowed to buy anything in the line of groceries for the Parker household." (Note: this was before his second two daughters, twins Tracey and Beth came into the world.)

He told Forrest Powers in the 1971 interview that before coming to Minnesota, he applied to join the Central Intelligence Agency. "I was waiting to get clearance from the CIA, and then I began hearing dire rumors about where I was to be sent. From then on I disregarded any communication from the agency and decided to stick with broadcasting."

Channel 9 went through many changes in its early years, going through several different ownerships, call-letter changes from KEYD-TV to KMGM-TV in 1956, and then KMSP-TV in 1958, and becoming an ABC network affiliate in 1961. Parker remained with the station through it all, hosting Parker On Sports following the late evening news on weeknights, doing play-by-play of Minneapolis Lakers basketball games on the station, and continuing his other duties as staff announcer, commercial pitchman and other stuff. He almost left, however, in 1960 when the Minneapolis Lakers packed up and moved to L.A. 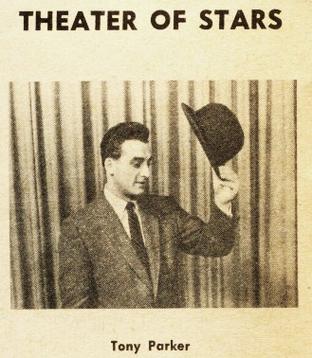 However, he didn’t survive the next revamping of the news programs two years later, as the station found a new sports expert in the form of George McKenzie. Parker remained with KMSP for a while longer as Associate Sports Director and station announcer, but he eventually decided to move on and pursue new ventures.

Well known for his strong work ethic, Tony Parker kept busy in his many years after leaving Channel 9. He took his experience in sports reporting and broadcasting and began teaching up and coming broadcasters and reporters at St. Cloud State University. The old veteran was said to be one of the best teachers in the business, connecting with his mostly young-pup students and instilling the knowledge he gained through his decades of experience. He was a longtime contributor to Bob Lurtsema's Viking Update, and in the 1980s he returned to television as a sports reporter and weekend sports anchor for WCCO-TV Channel 4. 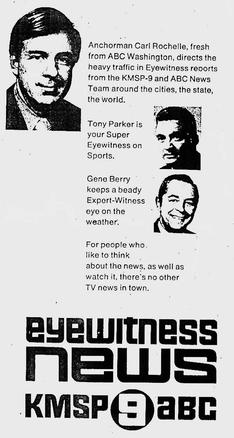 Tony Parker made history on January 9, 1955, six days after his 29th birthday, when he signed Twin Cities Channel 9 on the air for the first time. Apparently the station was ready to make a quick buck right away.

"I opened by saying 'Hi. I'm Tony Parker. And now this message,'" he told Minneapolis Star columnist Forrest Powers in a 1971 interview. "That was it—first my voice and then a commercial."

Women were becoming more prominent in TV sports by 1974, as Mimi Krieger was teamed with Tony Parker on the Viking Football Show.

Tony Parker would remain with the station for over 20 years as a booth announcer, sportscaster and personality. Among his many other career highlights, he taught broadcast and sports journalism at St. Cloud State University, did sports reporting and interviews for ABC Radio in New York, wrote for Bob Lurtsema's Viking Update, and in the latter years of his broadcast career, worked in the sports department of WCCO-TV covering events, and as the weekend sports anchor. Sports was in his blood, and when he passed away on May 27, 2010 at the age of 84, he was remembered for his professionalism, his baritone voice and his old fashioned just-the-facts style of delivery that sharply contrasted the in-your-face glitz and gimmicks of TV sports reporting today.

​Tony Parker was born Anthony James Oliveto on January 3, 1926 in Chicago. He earned a master's degree in economics at Bradley University in Peoria, and served in the US Army Air Corps during the Second World War. He married young, tying the knot with wife Phyllis, nicknamed Paul, when they were still teens, but they stayed married 63 years until her death in September 2008, and they would eventually have four daughters. He started in broadcasting at a radio station in Decatur, Illinois where he was told his Italian surname "will never do" and so he became known, at least professionally, as Tony Parker.

After his wife of 63 years died in 2008, it is said that that's when his health began declining. He died on May 27, 2010 at the age of 84 of complications from a fall. Colleagues, fans, former students and others who knew or met Tony Parker remembered him as a gentleman's gentleman. Thoroughly professional, but personable.

"Tony took on any assignment and made it sound interesting," said Mark Rosen in a tribute on WCCO-TV.

John Holler of Viking Update, who had previously been a student of Parker's at St. Cloud State said in an article on VikingUpdate.com, "He was a pro's pro in the sports media business in the Twin Cities. He had a certain 'cool factor'—the kind that made Dean Martin a star. Women liked his look and men could see themselves having a drink with him and talking sports. But what made Tony stand out was the part of his life few people ever saw."

Tom Ryther, who came to the Twin Cities from St. Louis to be the sportscaster at KSTP-TV Channel 5 in the early seventies says of his one-time rival, "Tony Parker was one of the finest persons I ever met in broadcasting or life itself. Completely capable in his job and very sincere and kind as a person. He befriended me soon after I got here in 1971. He once told me that an optimist is someone who takes their lunch to work at KSTP. He will be missed...if there is a word that describes Tony it would be, INTEGRITY." 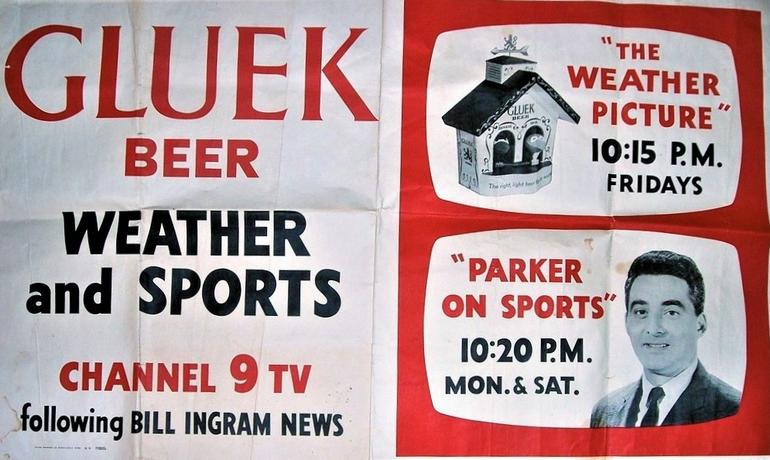 "I did the last play-by-play of a Laker telecast here," he said in 1971, "and I thought with the Lakers going it meant the end of big league sports in the Twin Cities area. Then the Twins, Vikings and North Stars came along, and we've had the baseball all-star game and World Series here, the professional football championship games and the Stanley Cup playoffs. I was so wrong."

Through the sixties and into the seventies, Tony Parker remained a key personality on Channel 9 as the station's sports director and main sports anchor, and his baritone voice continued to be heard in top-of-the-hour station breaks and commercials. During football season he also hosted Minnesota Vikings preview shows that were broadcast in the early evening one night a week. In addition, he had a part time free-lance gig as a sports reporter and interviewer for ABC Radio, which often required him to commute to New York, but Minnesota remained his permanent home. As a reporter for ABC Sports, he worked under the legendary and controversial Howard Cosell.

"Cosell is a first class guy," Parker told Forrest Powers. "He has done more for sports than anyone else around. He has taken it out of the phony ivory-tower concept."

At KMSP-TV he survived a revamping of the station's news programs in 1973 when a pair of youthful anchors, billed as "the Bright New News Guys on Nine," were brought in through a nationwide search conducted by the station. KMSP general manager Donald Swartz explained at the time, "We looked for a new sports expert, but found we couldn't top Tony."   ​

In 1971, as an ABC affiliate,
KMSP-9 teamed Tony Parker with newsman Carl Rochelle and weather forecaster Gene Berry for its own version of Eyewitness News.