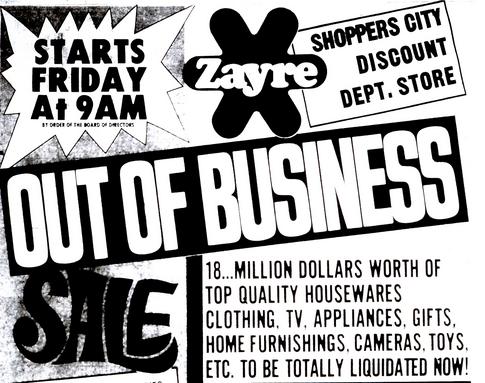 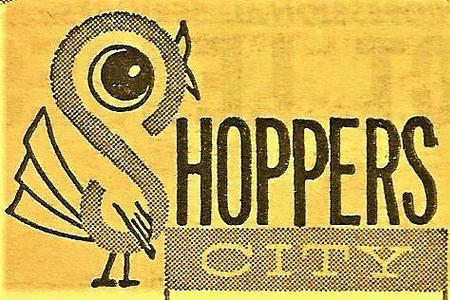 After Jeanne moved on, Zayre changed its imaging. They replaced the "Big Z" logo with a big orange asterisk, refurbished the stores with orange, brown and white decor, replacing the blue smocks worn by the employees with orange ones. But their Shoppers' City stores in Minnesota still maintained their own uniqueness from the rest of the Zayre chain.

Finally, Zayre pulled out of the Upper Midwest region in 1980, abandoning the Shoppers’ City name and concept altogether (Zayre-only stores continued to operate in other parts of the country as did other chains owned by the company), selling most of the outlets to Kmart. But they didn’t leave without controversy.

As soon as the Zayre Shoppers’ City "Going Out of Business Sale" was announced, with “savings up to 60 % off Zayre’s regular prices,” some customers noticed a lot of prices had been jacked up just prior to the sale. A local TV station investigated and Minnesota’s attorney general looked into it. Zayre Corporation vehemently denied any wrongdoing.

Finally in the spring of 1971 the stores were completely remodeled and made over in the Zayre image and were renamed Zayre Shoppers’ City. But unlike the regular Zayre stores out east, which were strictly general merchandise stores, Zayre Shoppers’ City stores would continue to operate with full grocery departments as well as the wide-ranging leased-out departments that made the stores unique.

Shoppers’ City’s main competitor was another Minnesota-based discount chain, Target, which has since gone on to national prominence as a “classier” discount store with outlets in almost every state, while Shoppers’ City and Zayre faded away decades ago.

The AG’s office found no evidence of deliberate public deception on the part of the stores, but that store managers, unaware they were about to “go out of business” had gotten updated price lists from corporate headquarters days before and had applied new price tags based on that. (Bar codes were not fully in use at that time, so it was easy to peel off a new price to reveal an old one.) Also some merchandise had been discounted from a previous sale and simply had gone back up to the “regular price.” Still, Zayre agreed to cut prices further for their “Going Out of Business Sale” to make everyone happy.

Zayre continued to operate stores under the Zayre name in other states, as well as other retail chains it acquired, until Zayre Corporation itself finally bit the dust in 1989.

You could even find a tiny no-frills gas station in the parking lot of some stores, where one could fill up at 20 cents a gallon (22 cents for Ethyl gas) with coupon in a 1966 newspaper ad. (Sorry. Offer expired October 8, 1966).

Through the 1960s Roth and Rothstein grew Shoppers’ City into a respectable chain of five stores in Minnesota, competing aggressively not only with department store retail but also with the big supermarkets, with full selections of groceries at competitive prices, their own store brands along with all the well-known name brands, and sometimes even full-service bakeries, and no trading stamps. They ran full-page newspaper ads and two-page spreads regularly, touting specials and sales on their already low prices on general merchandise and groceries.

The stores did brisk business but the overhead costs were very high and more capital was needed just to keep things afloat. In 1966, Zayre Corporation, which operated dozens of branded stores in several states east of the Mississippi, agreed to take over Shoppers’ City, but initially the chain continued to operate autonomously as a separate division of Zayre, with Roth and Rothstein continuing to run the division.

​“Think of the worst Kmart you've ever been in and then lower your expectations,” she quips.  “My first job was at the cafeteria.  The first day they put me in one of those see-through nurse's dresses without a slip and I felt like I was naked.  I had to wear a hairnet, too.  I was humiliated, especially since the grocery store was right there and all the cute bag boys could see me.  I'll never get over it.  Not to mention the horribly obese guy who came in every day and loaded his plate full of the awful swill we served and then I had to make him a milkshake.  One day he stopped coming in. RIP.

“Then I moved to Domestics, where we mostly re-folded towels and tried to sell some mismatched and ripped curtains.  I had a run-in with my supervisor, so I was transferred to Ladies.  Ladies specialized in hideous stretch pants for $3.  And they sold like the proverbial hotcakes.  Trashed fitting rooms, enormous women looking for bras, it was awful. But every once in awhile something cute would come in and I'd buy it.  I don't think there was an employee discount, though.”

In spite of all of that, Jeanne has plenty of positive memories of working at Shoppers’ City as well. “A lot of my friends worked there too and it could be fun…In general I think about it fondly. It was truly bizarre.”

Shoppers’ City was known for its uniqueness, and that continued under the Zayre regime. “One night we had a Midnight Madness sale, and everyone had to dress up in costumes - any kind of costumes.  They were really elaborate.  One manager was a hideous monster, one was a rag doll, one was a monk.  All I had was a Chinese jacket my mom had as a girl, so that was my costume (plus braids in my hair).  It was so much fun staying there until Midnight all dressed up.  Inventory was fun too - we stayed there until the wee hours of the morning doing very manual entries with pencil and pad.  I still make my 2s the way they required. We were all young and you had to have a sense of humor to work at the place at all, so it was fun.”

Jeanne worked there from age 16 until she graduated high school in 1975 and was ready to move on to college. “I won a $500 scholarship based on my SAT score - I only took the test for the scholarship, since the U took anyone in the top ten percent of the class.  I didn't have a car so I could save about $1400 for college, and that took me through two years at the dorm.”

Jeanne Andersen has a few memories of Shoppers’ City. “I remember when Shoppers' City came to town,” she says. “There was a billboard that said ‘Coming Soon,’ with just a spot on it. Little by little the billboard filled out with the picture of the bird, and finally the name of the store.”

As a teenager, Jeanne went to work for her home-suburb Shoppers’ City store beginning in 1973, with a starting wage of $1.98 per hour. “We belonged to the union and got nickel raises once in awhile,” she says. By this time the stores had undergone the Zayre rebranding and the cartoon bird was replaced with a “Big Z” Zayre logo, which she and her fellow employees proudly (or maybe not so much) wore on their store-issued blue smocks. But working there, she found, was sometimes "about as appetizing as working in a hot dog factory." 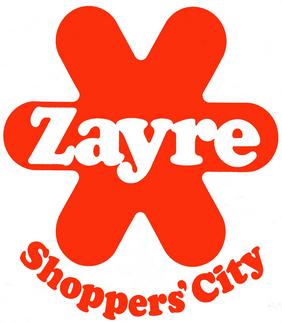 ​The well-known discount retail stores of today, Wal-Mart, Target and (until more recently) Kmart all got their start in that era, but one of the forgotten discount department stores, Shoppers' City, was an early regional chain that had grand ambitions. Shoppers' City was a Minnesota-based chain started in 1959 by Melvin Roth and Seymore Rothstein. Until they combined with the Massachusetts-based Zayre discount chain in the early seventies, Shoppers' City signage featured a cartoon bird shaped like capital letter S for a logo.  The stores boasted 100,000 square feet of floor space, and were a combination discount center and supermarket, with a lunch counter as well, and over time different departments within the stores were leased out to other businesses to provide an incredible range of services from furniture to optical to beauty parlors to barber shops. Even dance studios could be found (among many other things) in Shoppers' City stores. 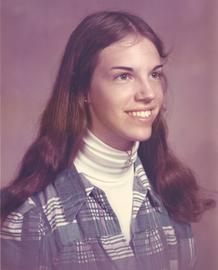 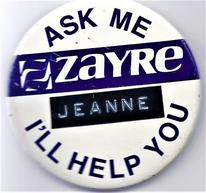 Around 1960 or thereabouts, big-box discount retail stores began taking up vast parcels of land across the United States, surrounded by huge parking lots to accommodate the automobile culture and a society on the move. The big boxes were adorned with giant electric signs that could be seen from far away and could catch an eye even at 60 or 70 miles an hour. Practically every new store that opened had an incredible Grand Opening with promises of excitement as well as low, low prices. Everything was big, big, big and cheap.

​These huge, over-the-top stores were a product of the ever-sprawling suburbia that began in the years following World War II. As Americans moved further away from the downtowns and main streets, and into neighborhoods of newly-built houses on vast parcels of previously undeveloped land and former farm fields, a giant store with just about everything and plenty of parking space (as cars became a necessity rather than a luxury) was just what everyone thought they needed in their new communities. And just like the little boxes for houses they all lived in, the big-box stores were filled with ticky-tacky, to paraphrase an old folk song.

These discount department stores had practically everything—housewares, appliances, clothing, toys, sporting goods, records, stereo equipment, gadgets, hardware, novelty wastebaskets, sometimes even complete grocery departments, cafeterias and optical centers, all under one giant roof, and at prices lower than the traditional stores that had those things. Whatever you needed was right there in that same convenient location. Quality, however, was sometimes lacking, especially in the early days of discount retail. Plastic crap that didn’t last, cheap clothing that fell apart or faded after one or two washings, etc.​​ 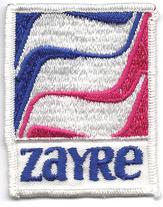 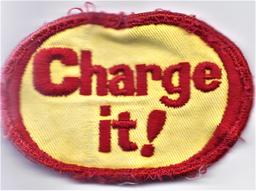