By 1980, as KSTP-AM was changing direction, John Hines left the morning show. He became the new co-host of the local daytime TV talk show Twin Cities Today on KSTP-TV (with Charlie Bush serving as the announcer), and other programs on the station.

Later, John Hines teamed up with Bob Berglund on WLOL-FM doing a morning show similar to the one he had done with Bush. Bush continued to do mornings on KSTP-AM and turned up as a late night movie host on Channel 5.

“Welcome you mid-morning movie maniacs to another edition of Charlie Horse , the show that pulls your leg ever so slightly,” he'd say after a kitchy theme song. Wearing a blue smoking jacket with bunny ears sticking out of the pocket, and with his dark, bushy brows, heavy-set figure and buggy eyes, he was not the typical TV host to say the least.

He would talk a little about the ancient movie that was about to be shown or would just say whatever was on his mind, often getting hit with a giant fly swatter or rubber bat by someone out of camera range. He would have an occasional guest and would do live commercials for small businesses such as Thompson's Family Fun Center, Thumper's night club, the Chef Cafe and Dick's Furniture Warehouse, the owner of which Bush would call “the Old Beluga Whale” (being portly himself, he could get away with it).

But the highlight of Charlie Horse was “Hate Mail,” where viewers were encouraged to write insulting letters to the host. He'd open the letters and read them at random live on the air, laughing hartily at all the pot-shots. The nastier the letters got the more he liked it and if a writer turned around and said “just kidding, I really think you're the greatest,” Bush would be disappointed that the writer was “wimping out.”

Charlie Horse had quite a following with late-night viewers who happened to stumble into the show, as it was never promoted by KSTP and TV Guide only listed the movies being shown. And certainly there was a lot of love in most every “hate” letter he received.

After doing his show, which would last roughly 30 to 45 minutes, the movie would start up and Bush would hang around the studio for a couple hours, preparing to do his radio show, which originated in the same building. However in August, 1981, KSTP-AM phased out music all together in favor of news and call-in programs (the beginnings of the talk radio format the station was known for until 2010). Bush was let go of along with another KSTP long-timer, Rod Trongard. Charlie Horse continued until the end of 1981 when KSTP-TV decided to eliminate the late-night movie hosts. There was talk of a syndicated Charlie Horse program featuring classic TV shows but it never materialized.

Bush occasionally reunited with former partner Chuck Knapp on the KS95 morning show when Knapp's regular partner, Michael J. Douglas, was off and in the fall of 1982 he teamed up with Johnny Canton on WCCO-FM. When ‘CCO-FM became WLTE and switched to a more-music-less-talk format a year later, Bush went to WDGY and later K-102 FM (KEEY), playing country music and maintaining his quirky style.

“Good morning! This is Charlie Bush on the Music Station, 15 KSTP St. Paul-Minneapolis with news you can use and useless information!”

In 1991, the Twin Cities lost one of its most unique voices in broadcasting, Charlie Bush. A master of pun and wordplay, Bush brought his often outrageous sense of humor to stations such as KSTP-AM, KSTP-TV, WCCO-FM, WDGY and K-102. He'd do news and weather forecasts in rhyme and would poke good-natured fun at his own sponsors in his live commercials. With his booming voice and jolly laugh, he seemed to be a natural radio personality. But, as it turned out, he never intended to work in broadcasting. He initially set out to be a lawyer.

​Charlie Bush was a native of Eau Claire, Wisconsin, growing up in the 1930s and '40s, the so-called golden age of radio but, he had said in interviews, he didn't care that much about radio as a kid. 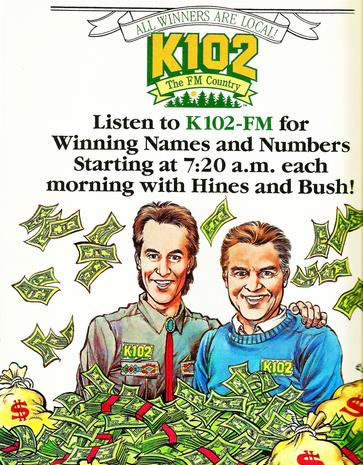 When Knapp left in 1976 (he returned to KSTP-FM three years later), Bush was teamed with 22-year-old John Hines, who was 20 years Bush's junior. But the two hit it off famously.

HINES: Wake up with us every morning.

BUSH: It beats hot bacon up your nose!

Hines In the Morning Plus Bush, as it was called, had continuing success for KSTP. They played the hits, bantered nonsensically, dug into the “Mail Bag” and read letters from listeners, gave advice to the lovelorn teenage listeners, and Bush continued to do his pun-filled newscasts. 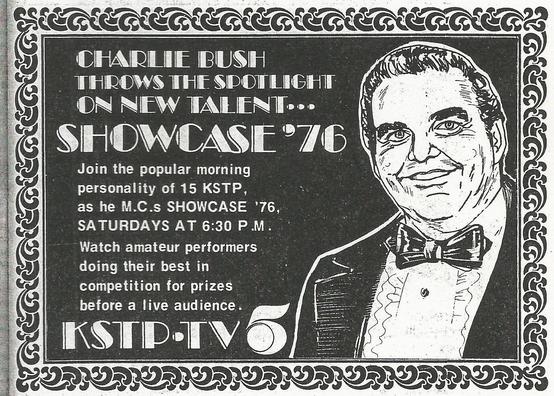 In early 1991, as Minnesota Public Radio bought out WLOL and moved KSJN to “ninety-nine and a half FM,” a matured John Hines came to K-102 and was teamed once again with his friend and mentor, Charlie Bush.

But the reunion wouldn't last. In the summer of '91, Bush was experiencing abdominal pain. A visit to the doctor revealed he had esophageal cancer. He took a leave of absence and on September 30, Hines broke the news to K-102 listeners. One month later, October 31, 1991, the day of the Halloween blizzard Minnesotans won't soon forget, Charlie Bush died quietly at his home in Coon Rapids, leaving behind wife Sharon, three daughters and one son. He was 58.

People who had worked with him and knew him over the years remember him as a intelligent, kind-hearted, patient man. He always made a point of encouraging young talent that may not have been so sure of themselves. On a personal note, at the age of 14, I naively called KSTP one morning when I was home from school as Charlie Bush was getting off the air and asked if I could speak to him. I was told he was busy but they'd pass on the message. To my surprise, a while later the phone rang and it was Charlie Bush, taking the time to chat with this young fan. I spoke with him again about a year later. That he was willing to take time out of his busy schedule for this dopey teenager speaks volumes about the character he had. 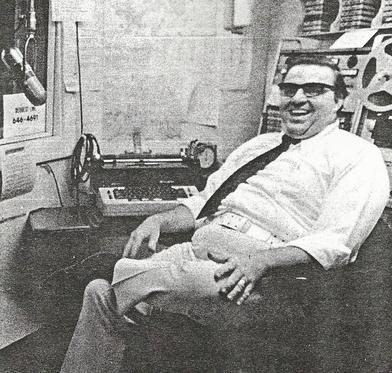 “President Carter has sent his tax plan to Capitol Hill and it's a near certainty the hill will give the bill new demands before they make it the law of the land....meanwhile the budget is coming in for some expected heat. Minnesota Republican Representative Bill Frenzel says that the bare-bones budget isn't so neat, that it has a lot of fat hanging on it!”

In addition to appearing daily on KSTP Radio, Charlie Bush was also heard as a booth announcer on KSTP-TV Channel 5, reading station identifications before the start of programs and announcing on locally-produced shows. In early 1976, he appeared on camera hosting his own weekly talent show, Showcase '76. But with his admittedly not-so-photogenic appearance, it was decided he was better suited for off-camera duties -- and late night TV. 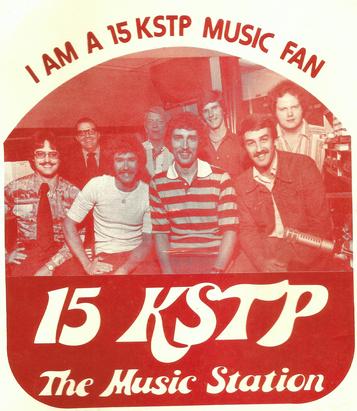 In 1991, John Hines reunited with Charlie Bush on country station K102 FM. But the reunion would be short-lived.

In the mid-'50s, while studying law in college, he applied for a job at a small station in Chippewa Falls to continue earning money for his education. The program director reluctantly hired him in spite of his lack of experience but soon he was considered the best talent on the station.

“I don't say that bragingly. For what they were paying, they just weren't able to hire all that much talent,” Bush told the Minneapolis Tribune in 1978.

He stayed with the station for two and a half years, let his law ambitions go by the wayside and later worked for stations in Virginia and Illinois. He arrived at KSTP-AM in 1964. Soon he would do “everything there except sweep the floors.”

“I'm surprised they hired me,” he told the Tribune. “I've made them pay ever since!”

At the time, KSTP's format consisted of easy-listening music and NBC programs. Bush spun records and read news, developing his quirky style. When KSTP Radio had broadcast rights to Minnesota Vikings football in the late sixties and early seventies, Bush would broadcast the pre-game show live from Metropolitan Stadium in Bloomington, wearing a snowmobile suit when the weather was particularly harsh at the outdoor ballpark, interviewing tailgaters and disarming them with his sense of humor.

​When KSTP became a rock ‘n' roller in 1973, a staff of young, hip DJs was hired but Charlie Bush was kept on board as a news director, although he didn't actually have anyone to “direct.” “I'm directing the news. Stand up, news. Sit down, news. Do something for me, news,” he'd tell people. He started out doing newscasts in the afternoon but was soon switched to mornings, where, at age 41, he was teamed up with 30-year-old Chuck Knapp.

Knapp was a “boss jock” who had worked at big Top-40 stations in Boston, Atlanta, Cleveland and Chicago, among other places. He was thin, with long hair and a mustache, and Bush would good-naturedly call him on the air “pencil-body” and “grungy, long-haired hippie freak” while Knapp would shoot back “When are you going to get all the grease out of your hair, El Blimpo?”

While Knapp would loudly do his carryings on at “15 KSTP The Music Station,” which included a lot of silly and sometimes suggestive jokes, stunts and other shenanigans between records by groups such as Bad Company and Grand Funk, Bush would re-write news copy from the wire services, filling them with alliteration, rhyme, puns, etc. (“A brace of banditos making a bid for big loot in the boot....Meanwhile they're still fussin' over bussin' in Boston....the latest reading of the congressional confessional has the Democrat frat fearing they may have to swallow a bitter pill on the Hill....”)

Chuck ‘n' Charlie, along with the new rock format, brought KSTP-AM from 13th place to second place in the Twin Cities overall ratings, and in first place, above perennial number one WCCO among listeners 18-34 years of age. The morning show made a serious dent in the ratings of Howard Viken at ‘CCO and the two would gleefully mention that on the air.