Published in 2010. Chronicles from the Analog Age is a time capsule filled with relics from the not-so-distant—but in many ways vastly different—past. The Twentieth Century, or more specifically the 1920s through the 1980s when civilization revolved around analog technology.

Chronicles from the Analog Age takes you on this time warp through the decades with illustration and a casual narrative that makes you feel you really are there. It’s not a dull history book but more like a magazine that can be picked up and read from any page.

Chronicles from the Analog Age introduces you to people. From ordinary people like the owner of an old neighborhood cinema who recalls the ins and outs of the changing theater business through the decades, to famous people like newsman Mike Wallace in his 1950s life as an actor, game show host, TV pitchman and controversial interviewer. From self-proclaimed redneck presidential brother Billy Carter to a seventies-era employee of a long gone discount department store. From 1940s stars Gene Autry and Arthur Godfrey (and what happened when one visited the other’s radio show) to Los Angeles rock jock Robert W. Morgan, to the reminiscences of a post-war teen babysitter (and the jaw-dropping things she got away with back then!). You’ll meet lots of other people along the way as well. 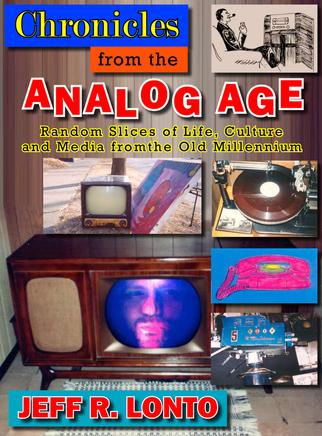 Chronicles from the Analog Age brings you to events and phenomena as they happened such as cold war bomb scares of the fifties (get into that fallout shelter!), radical bomb threats of the early seventies (including one at a Major League Baseball game), the social upheaval and technological advances of the twenties (that rivaled what we think we know about the sixties), fun facts about life during World War II, the silly do-gooder campaigns against Saturday morning cartoons and rock ‘n’ roll records, a comedy TV show that outraged an entire nation, a 1960s Canadian beer scare and much more.

Chronicles from the Analog Age also has a quirky sense of humor with looks at “Bad Old Ads,” commentary and humorous filler pieces. It's 100 BIG pages of fun!

So climb aboard, hang on and be prepared to be stunned and amazed as we visit ordinary, everyday life in…the Analog Age.

"CHRONICLES FROM THE ANALOG AGE is the most delightful, complete and detailed compendium of true stories, anecdotes and advertisements addressing mass electronic and print media's birth and evolution. Anyone who cares about how wholesome, dignified and fun the world was before Tweets, texts and sound-bites MUST have this book, and revel in the richness and attention to quality prevalent in the early to middle years of the 20th century. Author Jeff Lonto is a media historian whose passion for detail allows readers to be immediately transported to a time they'll wish could return. Bravo and brava for his excellent work."

"Chronicles from the Analog Age is a 'Remember When?' for boomers...Baby boomers will remember--perhaps reluctantly--much of what the book covers...(It) is a stroll down memory lane, with stops at dark alleys, grease pits, and sink holes..."

"Lonto captures a few of the high(low) points of the twentieth century as he describes some of the now departed unusual events in words and pictures. The writing is satirical and sometimes cynical as he occasionally injects some clear opinion into his explanations...The 'good old days really were not as remembered' is one of the most accurate phrases in the human experience and that is evident in this book of brief vignettes about the way things were in the century just ended. Often humorous, sometimes profound and occasionally biting, the stories in this book describe the twentieth century as it was. It was a time of great change, technical, social and cultural."